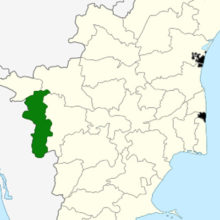 Coimbatore is a major city in the Indian state of Tamil Nadu. It is located on the banks of the Noyyal River and surrounded by the Western Ghats. Coimbatore is the second largest city in Tamil Nadu after Chennai and the 16th largest urban agglomeration in India. Coimbatore lies at 11°1′6″N 76°58′21″E in south India at 411 metres (1349 ft) above sea level on the banks of the Noyyal River, in northwestern Tamil Nadu. It covers an area of 642.12 km2 (247.92 sq mi).It is surrounded by the Western Ghats mountain range to the west and the north, with reserve forests of the Nilgiri Biosphere Reserve on the northern side.The Noyyal River forms the southern boundary of the city, which has an extensive tank system fed by the river and rainwater .The city is located at 352 km from Bangalore, 192 km from kochi, 197 km from Mysore, and 500 km from Chennai.