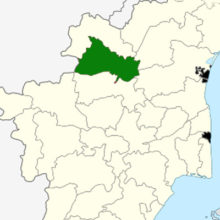 Dharmapuri is a district in western part of Tamil Nadu in India. It is the first district created in Tamil Nadu after the independence of India by splitting it from then-Salem district on 02 October, 1965. The other major towns in the district are Harur, Palacode, Karimangalam, Nallampalli , Pennagaram and Pappireddipatti. Dharmapuri District is one of the major producers of mango in the state, fine quality granite is found in the district.

It is also one of the main sericulture belts in the state. Around 30 percent of the district’s area is under forest cover. Kaveri enters Tamil Nadu through this district.