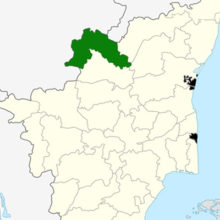 ‘Krishna’ refers to ‘black’ and ‘giri’ refers to ‘hill’. This district is gifted with black granite hillocks and named as “krishnagiri”. The region came under the rule of Krishna Deva Raya and hence it might have been named after this king.
The holy land of wise scholars, men of valour and courage, blessed with the green valleys, hills and hillocks and inhabited by people known for innovative farming was divided, for the formation of Krishnagiri district, carved out of Dharmapuri district as 30th district of Tamil Nadu.
People of Krishnagiri District belong to various racial groups. People from Kashmir, Maharashtra, Karnataka and Andra pradesh have settled in this District. Hence it can be rightly called a Cosmopolitan society.
Ancient Art & Culture is preserved and maintained by inhabitants. The major entertainment for rural folk form the ‘Street Play’ (theru koothu) and ‘Sevai Attam’.

I. Krishnagiri district is bounded by Vellore and Thiruvannamalai districts in the East, Karnataka state in the west, State of Andhra Pradesh in the North Dharmapuri District in the south.
II. Major religions are Hindu, Islam and Christianity. This district stands as an ideal exhibit of National integration and religious harmony. The society exhibit the confluence of different languages and religions.
III. Four National highways converge at the Head Quarters of this district is unique.

I. Its area is 5143 Sq. Kms.
II. This district is elevated from 300m to 1400m above the mean sea level. It is located between 11º 12’N to 12º 49’N Latitude,77º 27’E to 78º 38’E Longitude.
III. Eastern part of the district experiences hot climate and Western part has a contrasting cold climate.
IV. The average rainfall is 830 mm per annum. March – June is summer season. July – November is Rainy Season and between December – February winter prevails.