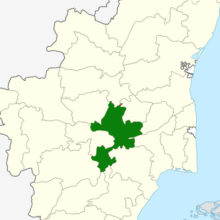 Tiruchirappalli sits almost at the geographic center of the state. The Cauvery Delta begins 16 kilometres (9.9 mi) west of the city where the Kaveri river splits into two, forming the island of Srirangam, which is now incorporated into the Tiruchirappalli City Municipal Corporation.